HotDocs Diary #1: So, this is what it's like to be invited!

Today was my inaugural HotDocs 2007 event, and the first one I’m attending as an invited guest. My trek to the theatre was not an easy one, since the bus I’d planned to take to the venue was almost 20 minutes late (or 5 minutes early, depending on which scheduled bus it actually was). Once I arrived at the Bader, I exchanged my email invitation for a hard ticket and took my place in the ticket-holders line.

The audience for the opening-night screening was made up almost solely of industry folks and corporate sponsors, so it was not unlike attending a TIFF Gala screening. There were numerous exuberant greetings between friends who presumably hadn’t seen each other since the last fest they attended, and more cell phones than you could shake a brain tumor at. Unlike TIFF, big bear hugs seemed to replace air kisses, which was nice.

(As an aside, the weather for today and the next few days is supposed to be exceptionally sunny and warm, so I wonder if the Bader bees will make an early appearance?)

Remember how I theorized that there might not be much to gripe about at HD? I was wrong...because I forgot about APL: Annoying People in Line! They’re the ones who cut in front of you, or smoke cigarettes right beside you, or yap on their phones about a foot from your head.

Or, they’re like the two young women who were in front of me, who actually stop the progress of the line. You know the ones I mean. They don’t keep pace with the people in front of them, so once the doors to the theater are opened and the line begins moving, you and the rest of the folks behind you wind up in the line equivalent of a drain clog...watching helplessly as the gap between you and the first chunk of the line widens with each passing second. People behind you start to get antsy and you can see random linemates starting to move around to flank you. They’re thinking of going around. Chaos is imminent.

These two women, who were so engrossed in themselves, their cell phones and their outfits, didn’t have tickets, either. Nevermind that the volunteer working the line earlier specifically asked everyone “ticket holders? you have your tickets?” and they nodded. They lied. They had their invitation – the one that said, in big letters across the front, “submit this invitation at the theater box office to receive your ticket” – but hadn’t actually followed its instructions.

So, anyway, the doors open and the line starts to move. I notice immediately that the two women in front of me are walking extremely s-l-o-w-l-y. Like, sloth slow. And they were slowing down further with each step until they achieved the least amount of movement possible without actually standing still. I wasn’t sure what the hold up might be, but when we finally reached the main doors, it was revealed: they were waiting for someone and trying to delay their entry in case that someone magically arrived. Then, an eagle-eyed volunteer spotted the fact that they didn’t have tickets and pointed it out to them. They seemed confused. “What? Oh, really? What do we do?” He pointed to the clearly printed exchange instructions.

By now, the line had come to a dead stop as Tweedle-Dee and Tweedle-Dolt debated whether to go in and sit down, or wait outside. Tick tock tick tock. I could sense the line behind me getting impatient. Finally, they took a half-step out of line and I moved briskly past them, with the rest of the line following me in. Sheesh! 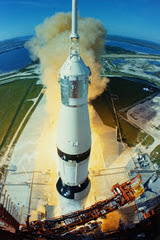 The opening-night documentary was In the Shadow of the Moon (7/8), a beautiful film chronicling NASA’s Apollo space program. It features insightful, funny and occasionally moving interviews with eight of the surviving Apollo astronauts, archival footage of their training, news reports from the era and some breathtaking footage taken during their missions to the moon. It also manages to simultaneously be a meditation on planet Earth amid a discussion of outer space. Walking in, I thought I would be bored silly, but I was completely mistaken. I thought it was excellent, and surprisingly emotional.

The only celeb sighting (and, really, I didn’t think there would be any at all during HD) was Sarah Polley, who also attended.

Today, I pick up my press pass and, if it’s anything like the industry passes some folks were sporting last night, it’s HUGE. Sort of like wearing a laminated sheet of paper around your neck. Still, it means free tickets, so it’s fine by me!
Posted by Vickie at 9:24 AM

Ooooo... I really want to see Shadow of the Moon! I'll bet my bro, Moviepie Tom, would have kittens over it! :D

It really *is* good. I'm not a space fanatic, and I was fascinated, so anyone with even a passing interest in the moon and its precious few visitors should lurrrrrrve it.